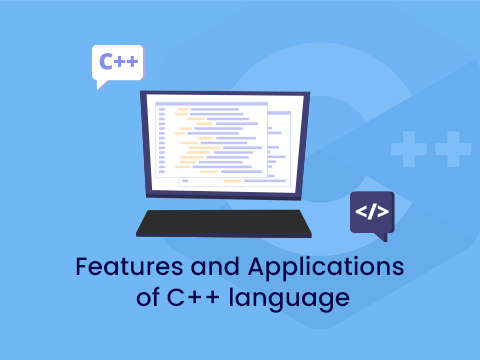 C++ is a general-purpose programming language that was developed with the intention to improve C language and include an object-oriented paradigm. Object-Oriented Programming is a programming in which we design and build our application or program based on the object. Objects are instances (variables) of class. It is an imperative and a compiled language.  With C++ inheritance, one object obtains all the properties and behaviours of its parent object automatically. It lets you reuse, extend or modify the attributes and behaviours defined in other class.

Being a middle-level language, C++ gives it the ability to develop low-level (drivers, kernels) and even higher-level software like games, GUI, desktop apps, etc. The main motive of creating C++ programming was to add object orientation to the C programming language. The main changes that were made are object-oriented programming methodology, namespace feature, operator overloading, error & exception handling. The other motive of OOP (object-oriented programming) is to try to understand the whole system in the form of classes & objects.

With Object-oriented programming, data does not flow freely around the system. It gets bound more closely to the functions that operate on it and gets protected from the coincidental change from outside functions. OOP breaks down a complex program into objects and then builds data and functions around these objects. It is one of the advantages of C++ programming language, but before we learn about its advantages we should look at its features first.

C++ is an object-oriented language, unlike C, which is a procedural language. It means that with C++, the main focus is on “objects” and working around these objects. These objects help you execute real-time queries based on inheritance, data abstraction, data encapsulation, data hiding, and polymorphism. Let's discuss what these five main terms of object-oriented programming mean.

Inheritance:  Inheritance means inheriting or acquiring the properties and features of the object of one class to another class. It provides reusability of code. The basic idea of inheritance can be implemented by creating more than one class, which we usually refer to as derived classes by joining them with the base class.

Data encapsulation: Data encapsulation simply implements data abstraction by wrapping up the data and functions into an independent block or single unit called class. Using encapsulation, the C++ software engineer cannot directly access the data as it is only accessible through the object of the class.

In simple terms, machine-independent refers to using the same piece of program in different environments. To understand this C++ feature better, let's take an example. Suppose you write a piece of code for a desktop application in C++ for Microsoft Windows and for some reason you want to switch your operating system to LINUX. This code will work the same as it did in Windows.

When we start to learn a new language, we expect to understand everything in detail. The simple context of C++ makes it interesting for programmers, who are keen to learn a new programming language. If you already know how to work with C, then you don’t need to worry about facing any difficulty while working in C++.  C++ is referred to as “C with classes” as the syntax of C++ is similar to that of C.

5. Popular
C is the core language for several other popular programming languages with the support of the object-oriented programming feature. Bjarne Stroustrup found Simula 67, the first object-oriented language, but it was lacking simulations and so he decided to develop C++ afterwards.

7. Existence of Libraries
The C++ programming language provides a library full of in-built functions that make things convenient for C++ development companies and helps a coder significantly. These functions can be accessed by adding proper header files.

8. Speed
As mentioned earlier, C++ is compiler-based, therefore it is faster than other programming languages out there like Python and Java that are interpreter-based.

Uses of C++ in the real world

There are countless benefits of C++ programming in C++ mobile app development and even several desktop applications are only developed in this language for its features and security. Below are some areas where C++ has been used widely and effectively.

Applications: It is used for the development of the latest applications of C++ by software development companies in India and everywhere else. The applications are based on the graphic user interface, which are highly preferred applications like adobe photoshop. In fact, some major applications of Adobe systems are developed in C++ for example Illustrator, Adobe Premiere and Image Ready. Due to this Adobe developers are considered as active in the C++ community.

Games: This programming language is also used for C++ game development by majority of game development companies. It helps in optimizing the resources, overriding the complex nature of 3D games and supporting the multiplayer option with networking. Effectiveness of C++ allows procedural programming for accelerated functions of CPU and to give control over hardware. Because it is fast,  it is popularly used in developing the suites of a game tool or in gaming engines.

Operating Systems: Whether it is Microsoft Windows or Mac OSX or Linux, each of them is programmed in C++ or at least parts of them. C++ acts as a backbone of all the well-known operating systems; its fast programming language makes it a perfect choice for developing an operating system.

Web Browser: C++ is used for developing browsers as well, some of the popular ones are Google Chrome, and Mozilla Firefox. It also renders engines for the open-source projects of Google and Mozilla, simply because of the speed it provides. As a result, such low-latency operations use C++ as their primary programming language.

Banking Applications: A commonly known core banking system - Infosys Finacle uses C++ as one of their backend programming languages. As you can make out,  banking applications process millions of transactions daily, which require support for high concurrency and low latency. Therefore, C++ automatically becomes the favoured choice for such applications owing to its speed and support for multithreading.

Compilers: Majority of the compilers used for compiling other programming languages such as C#, Java, etc., uses C++ as the backend programming language. Both C and C++ are relatively lower-level languages that make them closer to the hardware and ultimately an excellent choice for such compilation systems.

Other Uses:That's not it, there are many uses of C++ in medical and engineering applications, Computer-aided design systems, departments for construction and mining Cyber security applications and more. Applications like MRI scans machines, CAM systems used in hospitals, local, state and national government, and others use C++. Even the telephone switches, routers, and space probes are programmed using this language.

Object-oriented programming allows the existing code to be reused with its inheritance feature. One can get the existing functionality and develop on it without needing to rewrite the code again. It results in a smaller length code.

C++ provides flexible programming using the polymorphism feature of OOP.  As polymorphism can take many forms, we will have operators or functions that work with many objects and hence save us from writing separate functions for each object.

When we modularize the program in OOP, it’s easy to modify or fix the bugs in the program if a problem occurs or if there is a new feature to add. Modularization also improves the code clarity and makes it more understandable.

OOP gives data hiding features to C++,  thereby keeping information safe from getting out. Only the information that is required for the stable functioning of the program is disclosed to the user by hiding essential details.

Maintaining code becomes convenient as it is easy to add new classes, objects, etc. without having to restructure or modify much.

C++ is the language that is used at a lot of places but largely in systems programming and embedded systems. By system programming, we mean for developing the operating systems or drivers that communicate with hardware and the embedded system are automobiles, robotics, and appliances. On top of that, it has a big and rich community and developers, which make the process to hire C++ developers and obtain online solutions easy.