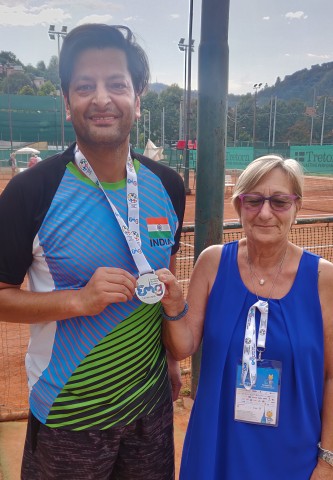 All the teams participating in men’s tennis doubles at EMG Turin 2019 were divided into four groups to compete in league matches, and the top team from each group progressed to the semi-finals. Mr. Chauhan and his court partner Vijay Kumar (India) displayed a splendid performance throughout the tournament. They topped their group in the league stage and played the semifinal match against Massaro Antonio (Italy) and Rastogi Avnish (India). The win in the semifinal match booked their seat for the final match.

The duo played the final match against 14 times ITF (International Tennis Federation) tournament winner Cecchi Steffano (Italy) and Gariglio Fabrizio (Italy). Cecchi and Gariglio won the final match, but the way Mr. Chauhan and Mr. Kumar played against the two professional international tennis players is commendable. Since Mr. Chauhan and Mr. Kumar mostly played on synthetic courts in India, playing on a clay court was a challenge as speed and bounce vary. However, some good training sessions before the tournament helped them adjust well and put up a competitive show to end up winning a silver medal in men’s doubles. 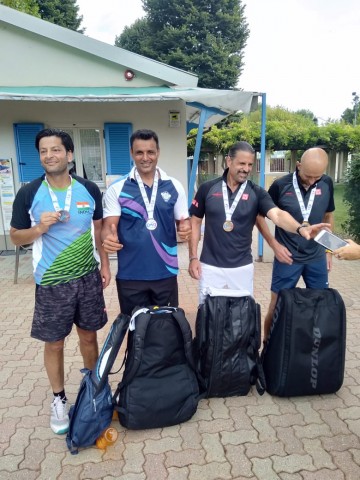 The European Masters Games (EMG) are organized every four years by the International Masters Games Association (IMGA), aiming at promoting sports and personal fitness among players who are above 35 years. More than 7,000 players from 75 countries around the world participated at EMG Turin 2019 under 30 sports categories. There were 5-year brackets that the players participated in - 35-40 years, 40-45 years, 45-50 years, 50-55 years and 55-60 years. 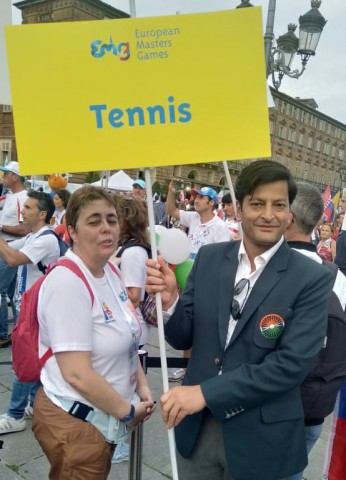 Mr. Chauhan is in high spirits after winning a silver medal last month in Italy and is looking forward to participating in the World Masters Games (WMG) that are slated to begin in May 2021 in Kansai, Japan. He says, “Participating in master games and winning a medal gives great joy, but playing tennis is much more than a medal to me as it helps me stay fit and increase my efficiency at all fronts.” “Everyone should get engaged in some sort of sports activity to stay fit and do away with the health risks of a sedentary lifestyle.”

All Evonians feel proud of Mr. Chauhan’s big achievement at EMG Turin 2019 and feel inspired to keep fitness a top priority by getting involved in some sort of sports activity.