Why choose C++ for your desktop application development project? 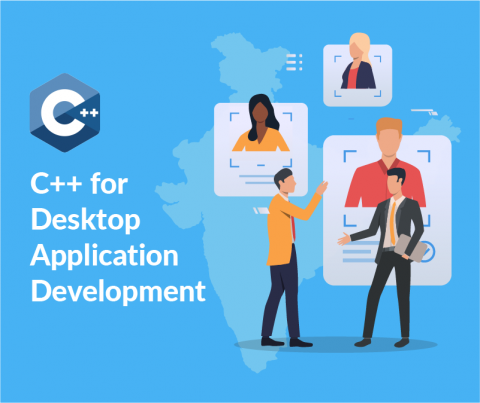 In the era of growing development of web applications, the importance of C++  desktop application development cannot be neglected. Desktop applications are a direct operating program for laptops and desktops that are developed to leverage the privilege of a rich user interface in addition to desktop computer processing power. Several notable software titles leverage C++ desktop framework, including Dropbox, MS Office, Skype, and popular game “Clash of Clans.”

If you consider this language at a central level, you will find that both C and C++ are basic languages and also have codes that are very similar to each other. On the other hand, C++ has been the foundation language for several other languages. It came out way back in the 1980s,  therefore this language is more prominently noticed as compared to other languages. C++ is an upgraded version of the C language. C++ software development covers everything that’s part of C and adds support for object-oriented programming (OOP). Besides, C++ also has many enhancements and features that make it a better option for desktop development with c++ and independent of object-oriented programming.

Why use the C++ programming language for desktop application development

C++ is a very prestigious language for its use in operating systems, games and low-level programming languages that require better control of the hardware on either the server or PC.  There is no denying that it is a well-rounded language if you consider the terms of target applications and platforms. If you want to run an application on computer hardware directly or a language that deals with desktop application development, this is certainly a most suitable option for you. Here is why switching to C++ for desktop application development

C++ usually has no standard user interface, the code for user-interface is written in the native language while C + + is used for the business logic. Java has JVM-optimized byte-code that can generate fast code, but native, i.e. machine code can be faster and beneficial in domains such as gaming, physics simulations and signal processing. However, you can do all of that in Java using JNI for low-level access, that adds a small overhead and that's why native language like C++ has a slight speed advantage.

In recent years, the support for C++ in compilers and toolchains in the microcontroller space has been a big deal for tool providers. If you review a few commercial and open source compilers and you’ll find that the latest C++ standard, C++17, is fully backed by the compiler. Not just support for the compiler, microcontroller manufacturers are starting to incorporate hooks in their own tools to be able to use C++ for business application development.

The C++ standard is likely to be updated more frequently than other languages. The C++ standard has been updated five times already with the latest version updated in 2017 and C++20 on the way this year. The updates aren’t necessarily just improving C++ but renewing features and adding the latest features to stay updated with the developments that are occurring in the business.

Microsoft released the free Express version of Visual Studio in 2005, and then the Community edition in 2013, which allows plugins and manages them through Microsoft C++ extension and Visual Studio 2019. C++ support for Visual Studio Code is provided by a Microsoft C/C++ extension to enable cross-platform C++ development on Windows, Linux, and macOS. Visual Studio supported C++ extensions right from the start along with the  C++/CLI, which became C++/CX for WinRT. It uses CMake tools as the build system for  C++ code which allows you to configure and build a CMake project.

There’s a lot of existing game code in C++ available out there, including open-source game engines and free content. While not all desktop games are programmed in C++, the utter number of resources out there allows you to establish a starting point for your desktop development with C++.

Portability: C++ offers the feature of portability also known as platform independence which lets the user run the same program on different operating systems or interfaces easily. For example, you write a program in LINUX OS, and for some reason, you switch to Windows, in that case, you would be able to run the same program in windows as well without any glitch. This feature has been a great help to the developer.

Object-oriented: The greatest advantage of C++ is the feature of object-oriented programming that involves concepts like classes, inheritance, polymorphism, data abstraction, and encapsulation that enable code reusability and makes a program even more secure. Besides, it also helps us deal with real-world problems by interpreting data as an object. C was previously lacking this feature and so it was created, proving to be of highly significant. This feature gave birth to numerous job prospects and the future of c++ programming and development.

Low-level manipulation: Since C++ is closely related to C, which is a procedural language closely linked to the machine language, C++ provides low-level manipulation of data at a specific level. That is the reason why Embedded systems and compilers are developed with the help of C++.

Multi-paradigm: C++ is a multi-paradigm programming language. The phrase “Paradigm” refers to programming style. It involves logic, structure, and procedure of the program. The three paradigms of C++ are generic, imperative, and object-oriented.  Generic programming means to use a single approach to serve several objectives. Imperative programming, on the other hand, means to use the statements that change a program’s status.

Memory management: C++ gives the developer the capability of total control over memory management. It can be an asset and a liability as it increases the engagement of the user to manage memory rather than being managed itself by the Garbage collector. This method is implemented using DMA (Dynamic memory allocation) using pointers.

In a HubSpot article, it mentioned that most consumers want their end product to fulfil the following requirements: functionality, convenience, price, design, reliability, performance, compatibility, and efficiency. So let's see where C++ stands when trying to satisfy these requirements.

Functionality:  Several popular desktop applications have been developed with C++, like Adobe Photoshop, Google Chrome, and MySQL. Several compilers for languages like C# and Java are programmed in C++. The functionality part of C++ is pretty apparent by its popularity and by the kind of applications that use it.

Convenience: Not only for drivers and firmware but also for high-performance applications and cloud services, C++ is used for a wide array of purposes. It gives you the option to create practically any kind of a product since it doesn't have the limitations of other languages.

Price: C++’s broad use lets many free and well-known development tools to help teams overcome the costs of additional licenses. These tools have also been around a while now and are well-adapted to different situations, therefore C++ development companies in India and around the world have more experience with them. It reduces some of the expenses related to training teams to work with a new tool.

Design: C++ pans well with various graphic interfaces, allowing for more versatility with design. For instance, the combination of QML and the Qt framework (C++ based framework) gives developers the capability to create enticing GUI designs.

Reliability: Applications developed with C++ are usually stable, have high performance, and have better functionality. The quality of the C++ language alone contributes largely to its stability. The next contributor is early error detection. During compiling C++ programs,  many errors and warnings are detected. Unlike script languages that are not compilable, so they miss out on this additional layer of quality assurance.

Performance: Software products created with C++ can work both on basic devices and high-end machines. They are well built to work in any kind of operating system and aid the creation of cross-platform solutions.

Compatibility. C++ is compatible with a lot of things, for example, you can entirely customize the interaction with modules written in C# or Managed C++. It can sustain any kind of inter-processor and network communication. As a result, you can use C++ for different infrastructures that are being used on the client’s side.

Efficiency: C++ lets you work with low primitives like registers and RAW memory, as well as with any type of abstractions like operating systems and cloud services. As a result, you don't need third-party adapters or modules, which makes getting the most efficient solutions much easier.

C++ has been around a while and it makes sense to hire C++ developers to solve innumerable industry challenges. Not only for high-performance server and middleware, but C++ is also a great choice for client-side development on the two most popular desktop platforms, Windows and Mac OS X.