Why Spring Framework is Preferred Choice for Java Enterprise Apps? 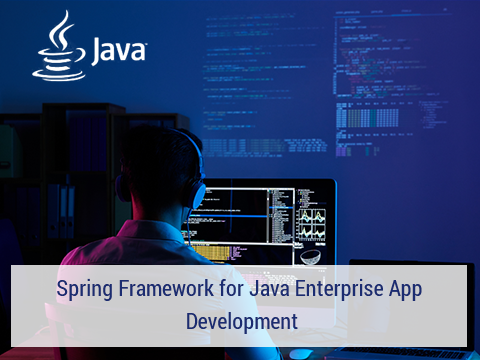 Spring is the most used Java Enterprise Edition (Java EE) framework for enterprise Java. Majority of developers around the world use Spring Framework to create high performing, testable, and reusable code. Spring framework is an open-source Java platform originally written by Rod Johnson and released under the Apache 2.0 license in June of 2003 to provide infrastructure support for developing Java applications. It is highly lightweight when it comes to size and transparency. The basic version of the Spring framework is closer to 2MB. It is one of the most popular Java Enterprise Edition frameworks, it helps developers create high performing and Scalable J2ee web applications using plain old Java objects (POJOs).

A Java framework is a vast body of predefined code to which developers can add codes to solve a problem in a particular domain. There are a lot of Java frameworks such as Java Server Faces (JSF), Maven, Hibernate, Struts, and Spring. Spring framework comes on top as it aims to make  J2EE enterprise application development easier to use and promotes best programming practices by enabling a POJO-based programming model. The core features of the Spring architecture is used for developing any Java project, it enhances the way that developers write and deliver infrastructure code in Java applications.

Inversion of control
The term IOC (Inversion of control) has its function in its name - it inverts the usual hierarchy of control for meeting object relationships. Instead of depending on application code to define how objects relate to each other, relationships are defined by the framework. IOC introduces consistency and predictability to object relations, but it does require the developer to give up some fine-tuned control.  In this concept, objects do not depend on the other objects but have information about their abstractions for further communication.

Dependency Injection
It is a composition of structural design patterns, in which for each function of the application there is one conditionally independent object that can demand to use other objects known to it by interfaces. Dependencies are applied to the service at the time of its creation. It is a situation where we add an element of one class into another. One independent object uses other objects with the help of interfaces in this concept. DI is transferred at the time of creation. It can either be applied with the help of setters or passing parameters in the constructor.  While usage, DI is implemented by passing parameters to the constructor or using setters. Libraries that perform this approach are also called IoC containers.

Aspect-Oriented Programming
This component helps to recognise cross-through (functional) functionality in an application. These functions, which span multiple application nodes are known as cross-cutting concerns and these notes are separated from the immediate business logic of the application. In object-oriented programming, the key unit of modularity is the class, while in AOP (aspect-oriented programming), it's the aspect. DI  separate application classes into different modules, and AOP helps to separate cross-cutting concerns from the objects they modify. Some common good examples of aspects include logging, declarative transactions, security, caching, etc. The AOP module of Spring Framework provides an aspect-oriented programming implementation letting you define method-interceptors and pointcuts to separate code that implements functionality that should be separated.

POJO (Plain Old Java Object) Based: Spring allows us to create a business application using POJO. When you use POJO, you do not need an EJB container.

Integration with Existing Frameworks: Spring can integrate with other existing frameworks like JEE, other logging frameworks, etc.

Testability: Testing an application is easier in Spring because environment-dependent code is moved into this framework.

Lightweight: Spring is useful for developing applications with restricted memory and CPU resources.

Spring Framework is divided into 20 separate modules, which allows you to determine which ones to use in your application. Below are the most important modules of Spring Framework architecture.

Core: It includes all the basic features of the framework, such as Dependency Injection and IoC.
Beans: It provides the Bean Factory and is responsible for creating and managing Spring Beans.
Context:  Context is built based on Beans and Core and lets you access any object that is defined in the settings. It acts as a means to access any objects that are created.
Expression Language: It implements a language for querying and manipulating an object graph.

JDBC: It provides an abstract layer of JDBC and eliminates the need for the developer to manually write code associated with connecting to the database.

ORM: It provides an integration object-relational mapping with popular ORMs such as Hibernate, JDO, which are implementations of JPA (Java Persistence API)

Transactions: It supports programmatic and declarative transaction management for classes that implement methods and POJOs.

Web module:  It provides various web functions such as downloading files, creating a web application, rest web service and so on.

Web-Socket:  It provides support for two-way communication between the client and the server, using Web-Sockets in web applications.

Aspects: The Aspects module provides integration with AspectJ, which is also a strong AOP framework.

Messaging: It provides annotation programming for routing and support for STOMP.

It's evident from this that Spring Framework is a robust and lightweight custom J2EE development framework used for Enterprise Java. The core features of the Spring Framework is utilized for developing any Java application and it can be described as a complete and modular framework. Developers can use the Spring Framework for all layer implementations of a real-time application. It can also be adopted for the development of a particular layer of a real-time application which you don't find in other frameworks like  Struts and Hibernate, but with Spring we can develop all layers.

Evon Technologies have more than a decade-long and extensive experience in modern J2EE architecture, Spring framework, along with latest features like Reactor for asynchronous event handling, WebSockets to help you meet your enterprise and technology goals. We provide a broad domain of enterprise application services: from ERP, B2B and B2C Web Portals to Business Intelligence & Analytics, and CRM. Our extensive experience in J2EE based web and app development has led us through building scalable J2EE web apps, Enterprise Information Portals, Enterprise integration, etc. Get in touch with us to hire J2EE developers or email us at This email address is being protected from spambots. You need JavaScript enabled to view it. to know more about how we can assist you.