Why to use C++ for your first audio video application project?

May 06 Posted by Staff Writer in Software Development Outsourcing 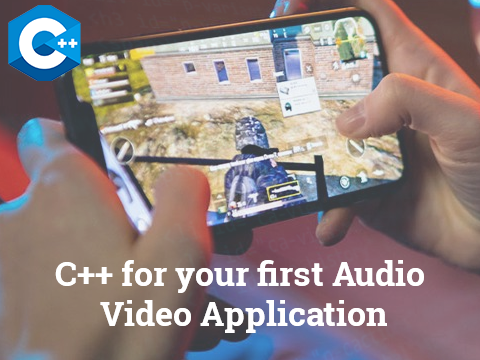 While other programming languages are built around the business domain, C++ is built around the computer. This gives you a much greater understanding of all building blocks of programming (Useful when you are starting your first C++ project). C++ plays quite an indispensable role in recent times as several contemporary systems such as operating systems, web browsers, and databases. They all have C++ code in at least some part of their codebase.  Furthermore, C++ is quite useful in performance-critical areas because of its fast speed. It is rather a low-level language, the language is big and you will need to handle a lot of complex things such as memory management. You also need to write a lot of code before you can achieve a working prototype if you are planning on software development from scratch. The good thing with C++ code is that it can be linked with existing C code for the best reuse of an application's legacy code and existing C libraries. Besides, C++ also has many enhancements and features that make it a better option for audio-video app development and independent of object-oriented programming.

Why use C++  for audio video applications?

C++ is a very prestigious language for its use in operating systems, for building desktop applications in C++, mobile apps,  games, and low-level programming languages that require better control of the hardware on either the server or PC. There is no doubt that it is a well-rounded language if you look at the terms of target applications and platforms.  If you want to run an application on computer hardware directly or a language that deals with audio and video application development, this is certainly the most suitable option for you. Here is why you should switch to C++ for business application development or your first audio-video application project
.

When we are programming an app with advanced programming languages, our main focus is on the implementation of functionalities.  We tend to follow the guidelines of best practices to avoid small errors, but it is not quite enough to attain better performance. To get better performance, you need precise profiling analysis to find out which type of code does well and how to rewrite them more efficiently.

C++ allows low-level manipulation of data. Embedded systems and compilers are created with the help of C++. You can write close-to-hardware code that is capable of running as fast as the CPU. It works in favor of applications where complex calculations might be required, such as performing scientific calculations.

C++ contains the Standard Template Library (STL) that is very useful for writing compact code as quickly as required. It has four main components which are algorithms, containers, functions, and iterators. There are different algorithms such as sorting, searching, etc. The containers store classes to execute data structures like stacks, queues, hash tables, vectors, sets, lists, maps. The functors in C++ allow the associated function to work and be customized with the help of the parameters passed.

C++ usually has no standard user interface, the code for the user interface is written in the native language while C + + is used for the business logic. Java has JVM-optimized byte-code that can generate fast code, but native, i.e. machine code can be faster and beneficial in domains such as gaming, physics simulations, and signal processing. However, you can do all of that in Java using JNI for low-level access, which adds a small overhead and that's why native language like C++ has a slight speed advantage.

Many modern-day databases such as MySQL, MongoDB, MemSQL are written in C++. It is due to C++ being constantly updated to support the latest features like exceptions, lambda expressions, etc. Several databases that are written in C++ are used in almost all of the top-end applications such as YouTube, WordPress, Twitter, and Facebook.

Applications that require advanced graphics such as digital image processing, computer vision, screen recording programs, etc. use C++ due to its high speed. It also plays a big role in C++ mobile app development as mobile games and graphics go hand in hand and most AAA game titles push the limits of existing hardware.  For instance, Counter-Strike, StarCraft: Brood War, Doom 3, World of Warcraft are all scripted in C++. Also, Xbox and PlayStation consoles are based on C++ programming. C++  is closer to the hardware level, so it is quite useful in embedded systems as the software and hardware work closely together. Numerous embedded systems that use C++ are smartwatches, MP3 players, GPS systems, etc.

Programs that are developed in C++ can be transferred from one platform to another. C++ is portable and has compilers available on more platforms than you would need. Languages like Java are seen as being massively cross-platform, but they are in fact usually implemented in C++ first.  This is one main reason why applications that lack multi-platform or multi-device development often use C++.

Advantage of C++ over its competitors

When we compare C++ with other compilable languages, like Java or C#, it knocks the competition in many categories. The categories include syntax, program execution, standardization, and other parameters.

Syntax: C++’s syntax is highly compatible with C, which helps resolve, as well as prevent several programming issues. Its flexible nature also allows developers to do things that are not possible with other languages and create programs for unique-use cases.

Environment Standardization: C++ doesn’t have any standards related to GUI, access to databases, dialogs, and so on, which makes it more flexible, allowing developers to create their standards for a unique situation.

Program Execution: C++ compiles directly to the machine code of a platform, which allows C++ developers to use it for low-level system utilities and drivers.  Writing the same code in Java or C# could lead to additional costs since these languages compile into an intermediate code that demands to be interpreted and compiled later.  Both of them need an intermediate processing level in the runtime like Java Virtual Machine and Microsoft .NET Framework to add their performance and facility restrictions.

Choose C++ for your Next Project

C++ software development continues to offer benefits for enterprises around the world, based on their business objectives. All things considered, C++ gives you the tools to think and code at a high level of abstraction, yet lets you get close to the machine when you need to. This is a unique combination of functionality that no other programming language can match, and it’s the major reason why C++ is still so popular in the app development world. On top of that, it has a big and rich community and developers, which makes the process to hire C++ developers and obtain online solutions easy.