Challenges of Hiring Tech Teams in a Tier-2 City 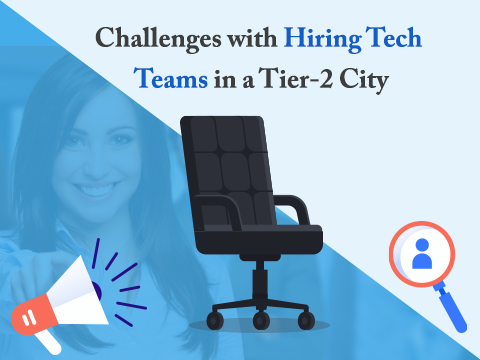 With over 4200 AICTE-approved Engineering Colleges across India, producing about 15 lakh Engineering Graduates every year, the availability of good tech talent has never been an issue for software development companies in India. And with the country’s economy growing, IT Companies are hiring 10-11%  more Tech Teams every year.

For companies located in Metropolitan or other tier-1 cities, the challenges with hiring do not lie in receiving a good number of applications, but selecting the best talent from the huge piles of applications made. On the other hand, technical recruiters in tier-2 cities face challenges on both fronts.

Let’s divide the pool of candidates into two categories: Local and Outstation.

There are some obvious and some unique challenges with local, tier-2 city candidates.

They come with a completely different package of challenging factors and are reluctant to relocate to a tier-2 city for various reasons.

IT Companies in Tier-2 Cities Blooming

Then what keeps the IT companies in tier-2 cities blooming? Their growth has been recorded at a much faster rate in the past 6 years than ever before. The factors that contribute to this growth and need to be highlighted more by recruiters may include less traffic, less pollution, low crime rates, better health, equally good facilities, home to some of best educational institutes, less cost of living leading to more disposable income (even at a lesser salary than a tier-1 city), better work-life balance, etc., all of which, put together, lead to a much better and enriched quality of life. Another reason behind the blooming of tier-2 cities is that more and more foreign IT agencies are now preferring to outsource software development to the tech teams in tier-2 cities.

The Government must pay more attention to further improving the basic infrastructures and facilities, may provide more incentives or tax benefits to attract bigger IT companies to open offices in smaller cities, and gradually distribute the population burden from tier-1 cities to tier-2 and -3 cities. Tier-2 and -3 cities have become a talent hub. Recruiters in tier-2 cities try to tap the local talent first. As they already understand the life of a small city, they are more likely to be a long-term asset. Other things that might ease recruitment and make it more effective include reaching out to the masses through different media, employer branding, employee referrals, portraying the accurate picture of the city’s lifestyle to candidates, staying connected with potential candidates through online professional platforms, customizing email/message templates as per the target talent-market, targeting candidates who have an affinity for what the city has at its best, and leveraging the city’s benefits.

IT companies in tier-2 cities should be prepared for recruitment challenges. But despite all hurdles, a thoughtful strategy can spell success.