Ethics in billing in an offshore team 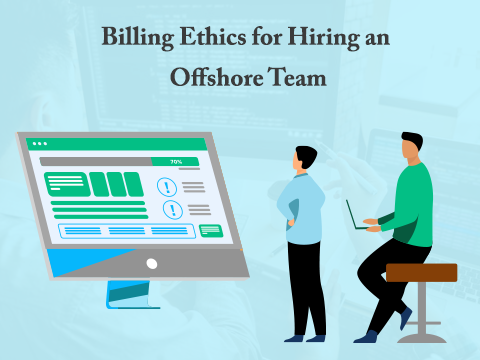 So, finally, your project idea is seeded and the product will start taking shape soon. The project idea, though, will evolve gradually, hence the requirement specs cannot be defined, resulting in difficulty in getting a fixed time estimate. So, what is the next step, how to take the project ahead for development, what type of team to get in place, and what billing model to work on?

Billing is easier if you decide to go on with hiring an in-house team. But what should be the billing model if the project is to be outsourced? In such scenarios, the project execution has to be carried out on time and material, a model where the payments are done based on how many hours are logged in by the team in a fixed time period, say 15 days or a month. Lots of clients are wary of this model for a simple reason: will the logged hours be genuine and how can they be sure they will not be overpaying.

In its earlier days, due to limitations on meeting tools, outsourcing meant that the parent company was in some other location and they provided the developers who worked onsite; so there was physical monitoring of logged hours and the work delivered from the client’s end. But as tools that facilitated meetings became available and made interactions and discussions easier, actual offshore outsourcing companies came into the picture and also came the concept of freelancing. Since then, clients are always in a dilemma: is the off-shore team following ethics during billing? Are they being charged for actual hours only?

To help clients overcome this dilemma, platforms like Upwork came up with the idea of screen capturing at regular intervals. They captured mouse clicks and keystrokes in the interval between two screen capture indicating that the user was active during that period. Having a glimpse on the screenshots, the client could verify if his project was being worked on. But with time, some unscrupulous developers evolved ways to dodge these tools too.

During those earlier days, a software named “Makhi” was introduced. All it did was mimic mouse movements and screen changs as it invoked all the front-end processes. Hence it mimicked the developer’s activities and was quite successful in dodging the clients. Though the platforms too evolved and software like Makhi were soon overruled, the doubts these types of software raised have lingered on.

What is the solution?

The simplest solution is for companies to maintain ethics and do genuine billing. Simpler said than done, because the clients might still have doubts and laying them down to rest might be difficult. The answer to this is also simple: evolve ways where efforts are tracked without any scope of manual adjustment.

One of the simplest ways is task-based management of the project. The module or required functionality is broken into the smallest possible tasks, the developers analyse and add story points based on the task complexity, and these can be discussed and agreed upon. Based on the team velocity, tasks are clubbed together to form a Sprint, which needs to be delivered in 40-80 hours. Now what goes into Sprint A and what goes into Sprint B is decided during Sprint planning meetings where the tasks are analysed and priorities are decided. The productivity is actually measured not in terms of hours but tasks delivered. This helps in many ways, the task tracking is also done so it’s measured how many tasks are done, how many are left, preparing burn-out charts. This approach can also forecast the time required to complete future tasks.

This approach is a win-win situation for both parties: clients know what to measure against what payments and the development team also needs to know what to deliver in the stipulated time.

This is simply following the Agile methodology with Scrum and Evon, a software development company in India has also geared up to walking this path. With 14 years behind us, we have worked on almost all major platforms and tools for hour tracking, task management, billing models, delivering MVPs to full-fledged products, working as an Offshore Development Center, and now, we know to a quite good extent, what works best for our clients. We have methods in place in which every requirement is broken up into tasks which can be tested and verified and the outcome is measurable.

Manage team and project with FINDNERD

Based on our experience we have built our product too, Findnerd. The beauty of this product is that it complies every aspect of project management in an Agile environment.

How does Findnerd ensure transparency in the hours being spent on the task and can it dodge any tool like “Makhi”? The answer lies in the fact that Findnerd has its own screen-capture tool. It takes screenshots between every 2-3 minutes and does a multitude of checks to rule out any bot-like activity.

With the processes in place and a project management tool which is more inclined towards maintaining transparency with the client, you are bound to get value for every penny you invest in the development of your products.