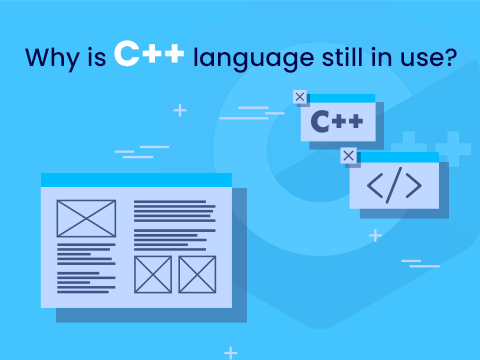 To answer this question, C++ was never dead. In our opinion, C++ future is bright, and it has been evolving and may evolve more rapidly in future with the ever-changing computational requirements. Bjarne Stroustrup designed the C++ language in 1979 since then the general-purpose language for programming has become a backbone for software development companies in India and everywhere else, despite competition from Java, JavaScript, Python, Go, and Apple's Swift.

As mentioned earlier, C++ is a general-purpose programming language and widely used nowadays for competitive programming mainly because of its imperative, object-oriented and generic programming features. C++ runs on lots of operating systems like Windows, Linux, Unix, Mac, etc.  It came on top for its high-speed processing and low-level memory management. Due to which it is still broadly used in the business industry, gaming sector, computer graphics and system programming.

In 1992, when Windows was still working as a 16bit operating system layered on top of MS-DOS, Microsoft introduced its Microsoft Foundation Classes (MFC) to developers. Most applications for Windows had been written in C earlier, but C++ was starting to grow, and the C++ developers were wanting an object-oriented method of improving Windows applications, to meet the efficiency of VB, released a year before that, but with the versatility of C. At the time, Microsoft’s C++ compiler wasn’t at its best. It did not have exception handling, templates, the standard library of containers and algorithms that could take advantage of the C++ programming features. MFC used macros to work as templates and exceptions and formed its own set of containers for concepts like strings, arrays, lookup maps and more.

Over the years, the C++ codebase has grown and served us well in C++ software development industry. Tons of software has been written in C++ since it was introduced all those years ago.  It’s a fast, high performing and low latency language that has been maintained and enhanced over time

The Design and Evolution of C++

The initial version of C++ called ‘‘C with Classes’’, first used in 1980; it supported traditional system programming techniques and data abstraction. The basic features of object-oriented programming were added in 1983 and object-oriented design and programming methods were introduced into the C++ community gradually.  As the result of general use and the introduction of several independently-developed C++ implementations, formal standardization of C++ began in 1990 under the adaptation of the American National Standards Institute (ANSI) following the International Standards Organization (ISO) leading to the international standard in 1998.

When we are programming with the advanced programming languages, our main focus is on the implementation of functionalities. We follow the guidelines of best practice to avoid small errors, but it is not quite enough to attain better performance. To get better performance, you need precise profiling analysis to find out which type of codes does well and how to rewrite them more efficiently.

C++ allows low-level manipulation of data. Embedded systems and compilers are created with the help of C++. You can write close-to-hardware code that is capable of running as fast as the CPU. It works in favour of applications where complex calculations might be required, such as performing scientific calculations.

According to the TIOBE Index for March 2018, C++ is still the most widespread language. C++ is everywhere, they power more technologies than we give it credit for. For instance, most operating system kernels are written in C, including but not limited to Windows, Linux, Mac, iOS, Android etc. Latest browsers are also written in C++, Chrome, Firefox are the prime examples. Modern game engines like Unity3D, Unreal Engine, cocos2d-x etc. are written in C++. As mentioned earlier,  compilers and interpreters of other programming languages are also executed in C++. So there is no reason why C++ would not be still in use.

Being one of the popular languages in the world, C++ is used by around 4.4 million developers worldwide. According to indeed.com, the average base C++ developer salary in the United States is $108,288 as of 2020, but the salary range typically falls between $87,583 and $169,583 which makes it a high paying job.

C++ contains the Standard Template Library(STL) that is very useful for writing compact code as quickly as required. It has four main components which are algorithms, containers, functions, and iterators. There are different algorithms such as sorting, searching, etc. The containers store classes to execute data structures like stacks, queues, hash tables, vectors, sets, lists, maps. The functors in C++ allows the associated function to work and be customized with the help of the parameters passed.

Many modern-day databases such as MySQL, MongoDB, MemSQL are written in C++. It is because C++ is constantly updated to support the latest features like exceptions, lambda expressions, etc. Several databases that are written in C++ are used in almost all of the top-end applications such as YouTube, WordPress, Twitter, and Facebook.

Programs developed in C++ can be transferred from one platform to another. C++ is portable and has compilers available on more platforms than you would need. Languages like Java are usually seen as being massively cross-platform, but they are in fact usually implemented in C++ first. This is one main reason why applications that require multi-platform or multi-device development often use C++.

Applications that require advanced graphics such as digital image processing, computer vision, screen recording programs, etc. use C++ due to its high speed. It also plays a big role in C++ game development as games and graphics go hand in hand and most AAA games titles push the limits of existing hardware. For example, Counter-Strike, StarCraft: Brood War, Doom 3, World of Warcraft are all written in C++. Also, Xbox and PlayStation consoles are based on C++ programming.

C++ is closer to the hardware level, so it is quite useful in embedded systems as the software and hardware work closely together. Several embedded systems examples that use C++ are smartwatches, MP3 players, GPS systems, etc.

Python and C++ are extremely different from each other, and most of the differences don't necessarily prove one more advantageous than the other. That being said, for most uses, it’s easy to choose a side and make a good case for or against particular language and implementation features. Python and C++, when associated with each other, can lead to a lot of opinions. Each developer will have their own opinion, so we have tried to sort a few of them to give you a clear outlook.

All things considered, we like how C++ gives us the tools to think and code at a high level of abstraction, yet lets us get close to the machine when we need to. This is a unique combination of functionality that no other programming language can match, and it’s the major reason why C++ is still so popular in the application development world.