Use of Blockchain in Finance, Healthcare Sector and How IT Makes it Happen 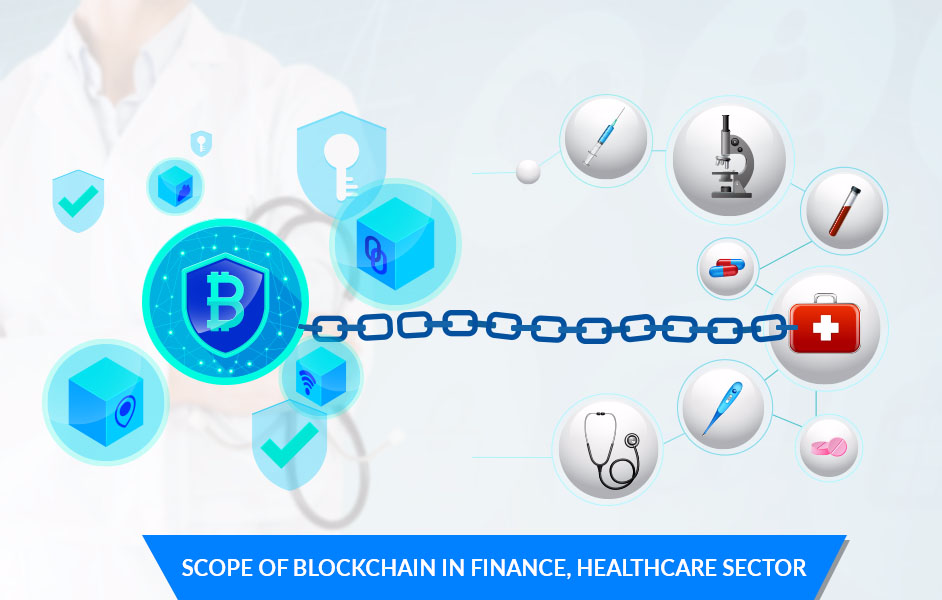 If you have been part of a team that needs to work simultaneously on a spreadsheet which is stored in a cloud environment, then you will not find it difficult to understand what a blockchain is. A blockchain is a kind of ledger that is remotely stored but accessible to all users simultaneously. Anyone who is part of the blockchain network can access it and update it in real time. The intriguing part is that it is not stored anywhere at a single location, therefore cannot be compromised by a single hacker. What we get is a shared database which is continuously updated in real time.

To get back to the spreadsheet example used earlier, many of you might feel that you have already used such kind of a shared document at work. But the way that works is slightly different. Say A, B, and C are three members in a team, and they want to work on the same document. At a very basic level, A would work on the file, save it as v1, and pass it on to B, who would save it as v2 after making the required changes, and pass it on to C. This would result in newer versions created every time some member of the team worked on it.

A slightly evolved way of doing it would be if the file was shared and stored in the cloud. But in the traditional way, the file would be locked for all others as soon as someone started editing it. Once that person finished editing, it would again be opened for anyone else to edit. So, it can’t be called editing in real time. Blockchain is a more evolved version of shared work, and additionally it has the advantage of security.

The interesting thing about blockchain is that it is not a new technology. It actually brought together three existing technologies. We, by now recognize networks as large numbers of computers and servers (also referred to as nodes), and blockchain also utilized a network. The security was added on to the network with the help of private key cryptography. Cryptography is widely used in applications like e-commerce. The two entities wanting to carry out a transaction over the internet hold two keys each – private and public. The correct combination of these keys can open the network to either of the two entities. The correct combination of the keys gives a digital signature. This digital signature is combined with a date and time stamp and other relevant information to create what is called a block. As soon as one block is validated, a new entry is created, which is connected to the previous block. So at any point of time, the whole chain of transactions is visible, but not editable.

The strongest feature of blockchain is the decentralization of computation power and control over the network and its transactions. The control, administration, and updates of the shared ledger can be done by any of the nodes. This decentralization makes it perfect for implementation anywhere where simultaneous multiple real-time updations could be required. That is why blockchain implementation is being envisaged in a large number of applications. Let us look at two of them.

Application of Blockchain in Finance

The genesis of Blockchain was to facilitate secured transactions of the cryptocurrency called bitcoin. But cryptocurrency is not the only aspect of Finance where blockchain can be useful. We are seeing the growth of fintech solutions and peer to peer banking, which are expanding the landscape above and beyond the traditional banks. Peer to Peer (P2P) lending would need robust security systems to ensure the sanctity of the lender and borrower data. This is the reason blockchain is also being used for credit appraisal. The blockchain can help in checking credit scores and ratings. The reason for this is that all transactions are recorded on a single chain of blocks, and those blocks are visible to all the nodes of the network. One more reason why blockchain is a popular choice for financial transactions is that the settlements are immediate, instead of in traditional platforms where there is a lag time.

Blockchain is set to bring in major disruptions in the financial sector because it does away with all kinds of intermediaries in the investment lifecycle. Because the transactions are automated, therefore the investor does not need to depend on anyone either for advisory services or for transactional support. Apart from the credit assessment we spoke about above, one area of financial services where blockchain is making big inroads is in risk assessment. Blockchain can enable decentralized risk management and advisory services that can help investors and promoters alike. In the world of wealth advisory, the risks associated with different derivative products would allow investors to easily hedge themselves against different kinds of investment risks.

Let us look at a few examples of companies which are using blockchain in providing financial products and services. We don’t need the first and most obvious example of cryptocurrency like bitcoin, because blockchain was actually created as a vehicle for transacting in bitcoins, seeing which the world woke up to the tremendous possibilities of the blockchain. Some of the more well-known names in traditional banking, like Credit Suisse and Citibank, are actively researching ways in which blockchain can be incorporated into their architecture. There are companies like Circle, BitPesa, and Abra, which have already started to use blockchain for their international money transfer services. They allow the transactions to be between peers or between businesses, and they ensure that the remittance goes into the bank account directly. Mycelium is a startup which has successfully incorporated blockchain into its payment systems. The mobile wallet and bank card of the customer can both be used to make the payment, which goes through the blockchain in a secured manner. This model’s use of digital tokens would really render the traditional banking system obsolete. In Australia, the trading of securities has been mandated by the regulatory authorities to be done through a system based on blockchain, especially for the clearance cycles at the end of the settlement periods.

Application of Blockchain in Healthcare

Blockchain is making huge inroads into the billing and claims segment of the healthcare industry. The use of blockchain not only helps in more secured processing, and easy retrieval of past records, but also does all of that in much faster time. Not only the time, but healthcare companies would also cut down the costs in processing of claims, by doing away with the intermediaries.

The major issue with medical care is that the patient’s medical histories need to be at one place and easily available to the medical practitioner. This is very important when the patient moves from one location to the other. It becomes even more important in the case of medical tourism, where the patient and doctor are from two different countries, and the patient is visiting just for medical treatment. Blockchain makes this possible. The doctor can quickly retrieve the entire medical history of the patient, including the results of recent tests done on the patient. This helps avoid repetitive tests.

Another area of healthcare which has inefficiencies is that there are multiple stakeholders and service providers. So, even if the medical records are collated into a single place, all the stakeholders need to get easy access to the data. This needs to be done in a secured manner so that others are not able to get access to a patient’s health records.

Let us look at a few examples of real-life implementation of blockchain in healthcare. IBM was one of the pioneers in genome sequencing. But the next level in this field of research was taken by Illumina who have come up with a very efficient machine for carrying out DNA sequencing. And they have used blockchain to ensure the sanctity of the data. Iryo is a company in Slovenia which is coming up with a complete healthcare ecosystem. This will help it build a data repository of health records which would be neutral to the different systems used to store records in. In Atlanta, Patientory has developed an app using blockchain which helps the users of the app store and access patient’s health data, and also all details of immunizations, prescriptions, insurance premiums, history of meetings with doctors etc.

We already spoke of two important areas where blockchain has already begun to be used in. For blockchain to go on to the higher levels of acceptance and use, one of the biggest hurdles that must be closed is the often conflicting regulations of different countries. Every country will need to come up with specific guidelines that will help the adoption of blockchain, and the different guidelines of different countries need to be aligned. Not only countries, but different operators who provide blockchain for use need to work on interoperability irrespective of the business it is being used in. We can expect to see blockchain applications spread to other areas other than healthcare and financial services with many Blockchain companies doing their bit. Evon Technologies, one of the best software development companies in india is one such company based out of Dehradun, India. Nevertheless, the security measures would need to become more and more robust as newer use cases of blockchain are developed. We have already seen the phenomenal opportunities blockchain provides, and the coming years can only see blockchain become more exciting.