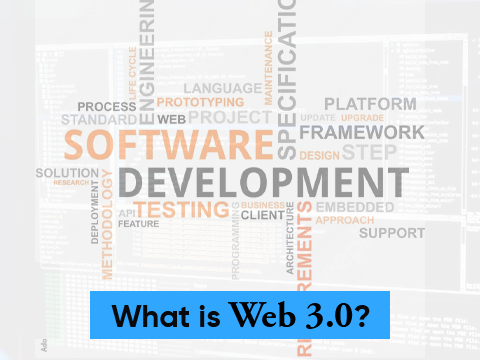 Web 3.0 denotes the next iteration or stage of the evolution of the web/internet and potentially could be as experimental and represent as significant a paradigm shift as Web 2.0 did. Web 3.0 is built upon the key ideas of decentralization, openness, and better user utility. Also referred to as the third generation of the internet, it is the next big thing on the world wide web. It delivers the data-driven semantic web utilizing a machine-based understanding of data to develop consumers' intelligent and connected web experience.

Today, the Web is more static and incapable of accommodating the individual needs of everyone who is going through it. Web 3.0 shows the potential to be more dynamic and interactive. Enforcing Artificial intelligence and blockchain technology will help reimagine the web experience with structural changes to ensure transition across all aspects on the internet.

With the emergence of mobile,  social, and, cloud technologies launched web 2.0, 3.0 is propelled by three new layers of technical innovation. Let’s study these layers in detail.

While web 2.0 modifies currently commoditized personal computer technology in the data centers, web 3.0 is pushing the data center out to the edge, edge computing, and perhaps right into our hands. Phones, computers, appliances, sensors, and automobiles will create and consume 160 times more data in 2025 than they did 10 years ago.

Decentralized data networks allow different data producers to sell or exchange their data without losing ownership, risking privacy, or depending too much on the middle person. As an outcome,  decentralized data networks will have a larger list of data providers in the emerging' data economy'. In web 3.0, data is decentralized, which means that consumers will manage their data.  With Internet Identity,  you can log in securely over the internet without being tracked down.

Artificial intelligence and machine learning algorithms have advanced to the point that they make useful, sometimes life-saving predictions and moves.  When built on top of a new decentralized data structure that provides modern tech titans access to a multitude of data, the potential uses go far beyond targeted advertising into fields like precision materials, climate predictions, and drug production.

The Semantic Web 3.0 claims to organize “ the world’s information” in a more logical manner than any Web 2.0 application. Given the rapid development of technologies on which Web 3.0 is based, it could take a shorter time to gain a foothold. We bank on it to completely change the way websites are created and how users interact with them. Below are the five top features of web 3.0 that might help understand it:

Web 3.0 Crypto
Indeed, blockchain and cryptocurrencies are gradually being introduced into the present economic model, and it is still doubtful when they will be completely integrated or become the predominant currency. The impact of Web 3.0 on blockchain technology will be huge as it will change how the end-users are going to interact with the digital technology.  In Web 3.0 cryptocurrencies are developed to make payments to content creators, who would receive tokens every time someone accesses their content.

There is going to be a healthy relationship between these three technologies as they will be automated, integrated, and interoperable. The process is based on smart contracts which will perform different actions like transactions, Censorship-Resistance and Anonymous P2P file storage, and application sharing. It would bring a revolution in the company’s way of doing business, along with empowering creators and users.

Metaverse
The metaverse is probably the first thing that pops up in our minds when we talk about the future of technology. Three-dimensional designs are often employed in websites and services.  The new version of the Internet can be perfectly incorporated into the virtual universe, allowing the 3D design of the websites and including IoT devices in their periphery. 3D graphics create a new kind of immersion not just in any game development company for innovative gaming applications like Decentralized, but also in other sectors like real state, health, and e-commerce.

Semantic web
The semantic web betters web technologies by letting users create, share, and link material via search and analysis based on the ability to capture the meaning of words instead of keywords and numbers. Blockchain and cryptocurrencies are successively integrated into the current economic framework, and yet it is not certain if they will be integrated fully or become the main currency at some point. But it’s different in the case of cryptocurrencies, they are seen as a mechanism to compensate content creators in Web 3.0.

Application sharing, transactions, and censorship-resistance peer-to-peer file storage will all be backed via smart contracts. It would entail a total shift in the organizational practices, as well as the empowerment of consumers and producers.

Artificial Intelligence
By infusing artificial intelligence with natural language processing, computers in Web 3.0 will be able to distinguish information in the same way as people, which results in getting faster and more relevant output. To fulfill the needs of users, they grow progressively intelligent. Even though it has similar capabilities as Web 2.0, It was mostly human-based, and is vulnerable to corrupt practices such as manipulated ratings, biased product reviews, etc. For instance, on online review platforms like Trustpilot, a company can employ people to write brilliant reviews for its product. To counter that and give reliable information, AI must learn to distinguish between the genuine and fake.

Connectivity or Ubiquity
Web 3.0 will ultimately eliminate many of the shortcomings of Web 2.0. Information is better synchronized with Web 3.0  because of the semantic metadata. As an outcome, the user experience advances to a new level of connection that benefits from all accessible data.

As we know that Web 3.0 is highly based on IoT sensors, it makes the Internet available to everyone, anywhere and at any time, without needing a smartphone or computer. That’s why the term Ubiquity, means having the ability to be anywhere at the same time. It can be defined in one word: prevalent. Web 3.0 just goes a step further by making that possible. Internet-enabled devices are no longer restricted to computers and smartphones, as they were in Web 2.0. Since IoT will bring forward a spectrum of new smart gadgets. Eventually, your identity, all your data, items you own, and every software capacity you have all will be connected and work together.

Once the Web 3.0 is implemented, no one expects a sudden break between the two, but rather like the previous shift, where changes are enforced one at a time. However, we see apparent differences between the two.

Also known as the “Static web” was a network that let people connect to another network without going too much further. It consisted of minimal interaction through contact forms and newsletter registration all through a linear communication model. It was not an option for users to give their opinion or ask questions, on top of having more control over the content.

Web 2.0 known as Social Web made a major leap from the previous version with an addition that allowed people to communicate with other people. When this extension appeared, users gained a good reputation through blogs, forums, and social media platforms. It picked up the momentum, courtesy of advances in technology like Javascript, HTML5, or CSS3, which allowed the construction of interactive and social web platforms such as Youtube or Facebook. For Desktop software, It is transformed into a web application, and the content drastically changed the design in which it is showcased.

Web 3.0
As we explained earlier, Web 3.0 is also known as the semantic web and the main difference from the previous version is the implementation of the common infrastructure that lets machines to recognize the meaning of information on the website, ease the work of the people, making the browsing experience of each user better, and filtering the content automatically. It would be only possible with these technologies: RDF to provide descriptive information about resources, OWL to provide an existential structured language, and SPARQL to provide semantic searches on web resources. They would allow adding semantic data to the endless number of existing webs, progressively.

We are at a point where Web 3.0 is just a set of ideas that rose from good intentions, it is challenging to give examples that depict what this new version of the Internet means, past the definition and top features of Web 3.0 we have mentioned in this article above. With semantics and machine learning in the picture, Web 3.0 comes off as an evolution in which computers can comprehend the meaning behind the information. They can understand what you are interested in, find what you want quicker, and understand the connection between things. Web 3.0 is no longer an objective but a reality in numerous cases. Making semantics and natural language processing a central component to it would make way for endless possibilities.

Evon Technologies believes that almost all of today’s offline machines, from home appliances like vacuums, microwaves, and refrigerators to all kinds of transport become part of the IoT economy. If you want the latest advancements in your web and app development projects or a software development company in India that has been a part of this web transition. You can reach us today or drop an email at This email address is being protected from spambots. You need JavaScript enabled to view it..