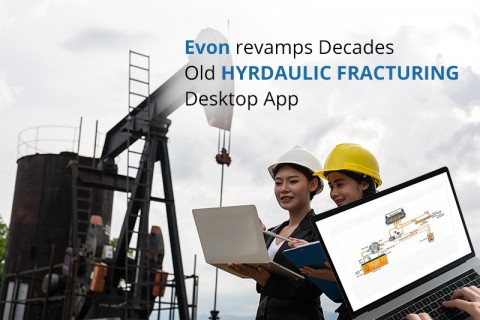 An independent Hydraulic fracture stimulation, engineering, and training company joined hands with Evon Technologies to revamp its legacy desktop app into a web app and migrate it to the cloud.

The desktop app was built decades back in 1984 and many tech partners that the client reached out to before Evon were a little shaky taking it up. The complex geological engineering running behind the legacy software was quite a challenge, but Evon a software consulting and development company in India, took the initiative to execute the technology transformation of the legacy software. It’s been over a year now that Evon has been successfully delivering the results the clients expected.

The work is still in progress, and Evon’s team is on it to bring it on a par with today’s advanced, user-friendly technological solutions. For this blog, I am mentioning below some of the areas where Evon has helped clients in the last one year to achieve their software transition goals.

Reduced the Time to Run Simulations

Windows server launch time was a big hurdle for end users. So, in order to reduce the time a simulation usually takes to run on Windows server, Evon’s team upgraded the legacy code written in .net to .net core. After migrating to .net core, end-users were able to run simulations on a Linux server with 90% lesser time than on a Windows server. The upgrade also enhanced AWS load balancing.

The old application was built using MongoDB 2.4, which posed a challenge to take the application to the cloud environment with an existing user database. So, to do away with the hiccups, the team took the initiative to upgrade it to MongoDB 3.6. The upgrade also made it possible to use fast, scalable, highly available MongoDB-compatible database service of AWS as and when the need arises.

This is something we do on-demand of the geologists. Whenever they ask to render any changes in 2d/3D graphs, we get the simulation output in the form of JSON data and start mathematical calculations and other complex algos to display it as graphical output.

Earlier, the software supported desktop licensing for its end users, but as we took it to the cloud, it was also required to maintain cloud licensing. The team worked on cloud licensing and successfully made it available with more features so that end users can have more choices.

Our web development outsourcing company also added automation CICD to the application. As a result, the developers are able to work in an environment of continuous integration and continuous deployment. Small and quick releases keep the team from reinventing the wheel which could become a case after working on multiple modules at once and then releasing them.

The team completely removed the manual process of desktop application creation for end-users. Now, we have a build server that generates setup executable files for end-users. It includes different versions for different companies and countries.

We have discussed above some of the tasks that Evon has successfully performed for the clients so far. The assigned team at Evon is continuing to work on other requirements and deliver the desired results. Evon, a custom web design and development company which also provides AWS data integration and deployment services, is proud of its developers who despite having no experience in geological applications and how hydraulic fracturing works (HFRACR) have successfully managed to deliver what the clients exactly wanted.